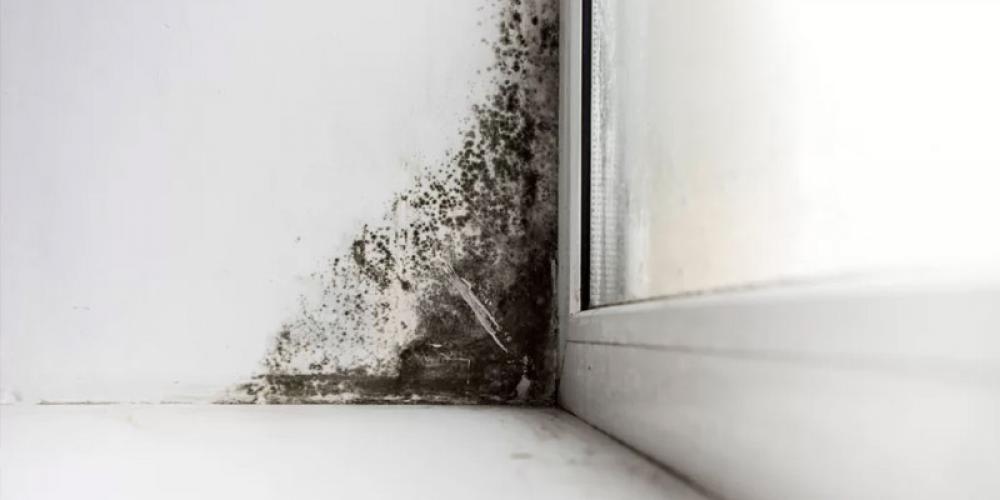 Mould in Buildings: What is it and how can it be Prevented?

Concern about mould in construction has been increasing as people become aware that exposure to mould can cause a variety of health effects and symptoms, and impact decay of the building’s structure.

As people spend a substantial part of their day indoors, be that in their homes, offices, schools, etc., ensuring and maintaining a good level of air quality is an important factor to consider when it comes to their health and wellbeing.

Mould is a collective name for several species of fungi, in particular filamentous fungi. Moulds are ubiquitous and when conditions are favourable, they can reproduce very quickly on almost any surface. (Bradley Prezant, 2008) They can be found in varying degrees of species in both outdoor air and indoor air (Wiesmüller GA, 2017).

Mould in buildings can be visible or hidden, but it is generally an indication of a weak point such as thermal bridging, condensation, leaks, or penetrating or rising damp.

Having no control of the indoor air quality can lead to mould growth and health issues. Exposure to microbial contaminants is known to be associated with increased respiratory symptoms including coughing, wheezing, asthma and COPD, to name a few. (Fisk WJ, 2007)

Mould requires water. Mould and Condensation is caused by a combination of the following factors:

To completely reduce or remove condensation and mould build-up, some if not all the above factors may need to be addressed. (World Health Organization (Europe), 2009)

What can be a Source of Moisture?

Examples of moisture-related problems in a building can include:

A typical household can generate approximately 12 litres of liquate per day.

How to prevent the risk of moisture effects?

Increasing scientific evidence showing problems that can arise from excess moisture and dampness requires a new awareness from the construction industry to prevent these issues.

Airtightness for active moisture control within the building envelope

Building assemblies need to be protected from moisture via rainwater, air and vapour diffusion.

The typical strategies use air barriers and vapour control layers.

Ventilation is required to remove or dilute pollutants and to control interior moisture levels of the building to an acceptable level for the occupant’s health and comfort. This can be provided by natural or mechanical methods.

The absence of a controlled ventilation system can lead to raised levels of moisture within the conditioned space during the heating months as a result of a low air change rate. These elevated levels of interior humidity can lead to condensation on window surfaces and give rise to surface mould and mildew, as well as concealed condensation within walls and roof spaces.

Continuous thermal barriers should be designed, installed, and maintained correctly to ensure they perform as expected and to keep the interior surfaces warm or cold, as designed.

Having a cold steel structure touching directly onto warm walls or ceilings without insulation can cause a cold spot which in turn can cause condensation and mould. If low internal surface temperature, on or around the area of a thermal bridge, are below the dew point of the air, condensation can form and when left untreated can cause mould growth.

Improving the thermal properties at windows and doors when building can greatly increase the protection against thermal bridges.

In existing buildings, the main option for controlling the moisture levels is a change to occupant behaviours and improve ventilation. Dealing with measures such as thermal bridges after the build is complete, can be costly and not as cost-effective in the short term when compared to adding adequate ventilation.

How Partel can Help?

Air leakage openings should be tight, moisture movement by vapour diffusion from the interior can be controlled using VARA PLUS and VARA FLUID smart vapour control layer in walls, and ceilings. This solution is ideal for the changing conditions of a house during the annual cycle.

Quite simple, in terms of building physics, these membranes change their vapour permeability depending on the ambient relative humidity (RH).
In the summer, thanks to Variable Technology, the molecular film of VARA PLUS and VARA FLUID becomes open to the diffusion of vapour, allowing the assembly to dry to the interior. In the winter, the layers can change their behaviour to protect the assembly. The VARA layer becomes close to the diffusion of vapour.

The LUNOS decentralised ventilation designed and supplied by Partel can be used to develop three different systems depending on the project and occupant needs: demand control system, hybrid system and a full heat recovery system.

As a decentralised system, LUNOS offer several benefits when compared to a centralised system. It can be considered easily for both new build and retrofit projects and avoids the need for expensive and complicated ductwork. Having no ductwork means having no need to drop the ceiling, less maintenance, and no need for a centrally located main unit. These show savings in both running and installation costs, as well as saving on space.

By using your floor plans and by working in line with the Building Regulation Part F, we can create a ventilation system design and quotation. Get in touch with Partel today to decide which solution best suits your project needs.

To tackle any thermal bridging issues that may arise during the construction phase, we also offer ALMA VERT recycled solution. ALMA VERT is a high-performance structural insulation panel, which meets the highest technical and ecological standards for reducing thermal bridges.

ALMA VERT has a construction material class of B2, a high compressive strength and brilliant mechanical strength. Thanks to its low thermal conductivity, this recycled panel is suitable for use in a window or door detail, in both commercial and residential projects, to improve the energy efficiency of the building. It can easily be cut on-site to allow for a straightforward installation.

It is clear from the wide variety of scientific evidence, that condensation and mould growth can contribute to health issues such as asthma, coughing, wheezing and other respiratory illnesses. Condensation and mould growth on interior surfaces of a building and within the building envelope should and can be avoided or minimized by tackling the above-mentioned issues.

A well designed, well thought out and well-operated building envelope is critical in order to prevent and avoid excessive moisture and mould growth. Internal management of moisture through proper temperature controls and ventilation can avoid excess moisture and condensation on surfaces and as a result, should prevent the associated mould growth.