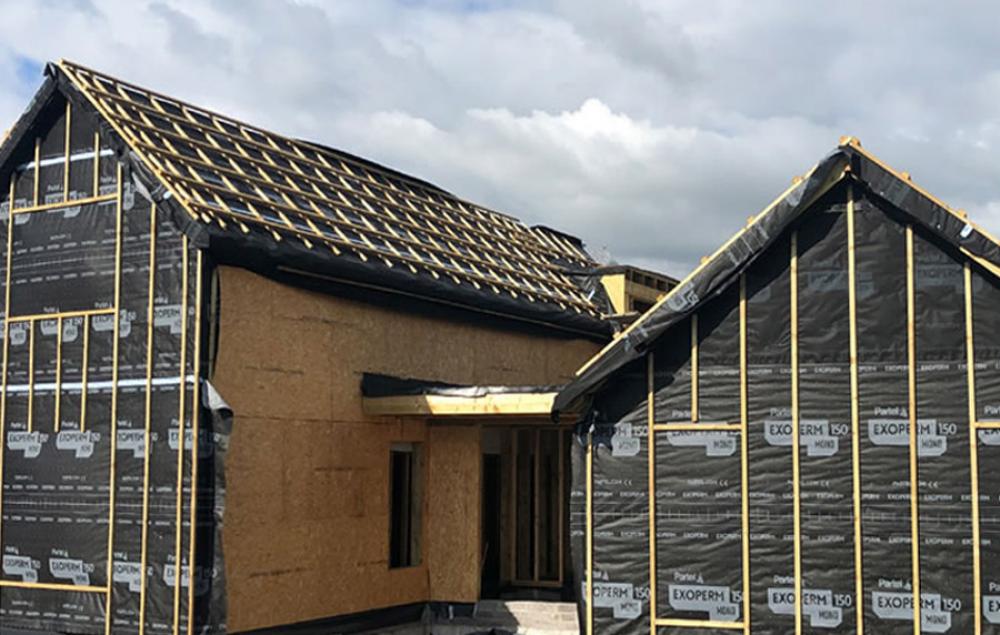 Why a Breathable all in one membrane makes sense

As the world battles with the crisis that is global warming, one way those of us in construction can help is by building more efficient low energy buildings. The cornerstone of a low energy build is making sure you get the airtightness right! The more airtight the building the less energy that building is likely to consume. However, one unintended consequence of making our buildings more and more airtight is that we must be even more conscious of how we deal with potential moisture within the building envelope.

This usually involves employing a Vapour Control Layer (VCL) like Izoperm Plus on the internal side of the buildings structure. This VCL often forms the airtight layer of the building’s envelope, but as the name suggests, it also controls vapour movement, allowing potentially any moisture trapped in the structure to escape.

That last part of the prior paragraph is important…it is paramount that any moisture that does collect within the structure is allowed to escape.

So what is the answer? We should design our buildings structure so that the breathability of materials increases the closer we move towards the exterior.
The Sd-value (the ability of a material to resist water vapour diffusion measured per the materials thickness in m) therefore of a good VCl should be a single digit number (5m/PERM 0.69 for example) which means the membrane is quite tight and does not let a lot of vapour through it. Then on the exterior a breather membrane should have a much lower sd value, less than 0.1m/PERM 42.9 meaning the material is highly breathable. In designining our buildings this way, the idea is that for the majority of the year any potential moisture trapped within the structure is forced outwards and away from the building, preventing mould and structural damage.
The above is critical for the maximum efficiency of the building, its longevity and the comfort and health of its occupants. However, wouldn’t it be great if we could help to prevent that water from entering the structure externally, improve the effectiveness of the insulation and form a strong, long lasting durable surface to our buildings structure.

Traditionally microporous membranes have been used as an external breathable membrane. The problem here however is that they have the tendency to clog and become water soaked. In some scenarios this can even lead to a trapped film of water/ice which can form an impassable vapour barrier, trapping moisture within the envelope. Cheaper microporus membranes can be heavy and strong while still having the same longevity issues. Ultimately the eventual failure results in roof replacement and all the associated costs and waste that can come with that.

Technological advances such as Monolithic technology has allowed us to now create new membranes like EXOPERM MONO 150 that actually move any local water found, quickly and out of the structure without the risk of blocking. In fact, the physics behind the molecular structure of the material means, that when more moisture is present this process of transporting moisture away from the internal structure accelerates.

Due to their construction, Monolithic membranes have been shown to be much more durable and stronger than traditional microporous membranes.
Real world testing has shown the membranes are up to 15 times longer lasting and unlike weaker microporous products they cannot be degraded by oils & solvents. Their structure also benefits in that the UV stability of these membranes is greatly enhanced in comparison to the microporous offerings. This enhanced longevity shouldn’t be underestimated, EXOPERM MONO 150 is designed to make buildings safer and more energy efficient for longer.

To conclude, while getting the detail and application of the airtight layer correct in a low energy home is extremely important, the effort and work done can be in vain unless a suitable, strong breather membrane is used that will protect the structure for years to come while allowing it to breath.